Stage 9 cancelled
due to rain and flooded roads

The Team PETRONAS De Rooy IVECO had no action on Monday as Dakar organization was forced to suspend the ninth stage due to rain and flooded roads.
​​Marc Coma, sporting director of Dakar 2018, remarke that the cancellation of the special was “not to take big risks because of the strong rains in south Bolivia and north Argentina”. Thus, the 242 kilometers that were programmed had been ruled out of the competition, and teams and drivers went directly to the camp in Salta, where on Tuesday the race will be resumed.
​
To sum up, To sum up, IVECO already won three stages: two by Federico Villagra from YPF Infinia Diesel Team De Rooy and another one by Ton Van Genugten, driver from Team PETRONAS De Rooy IVECO​.

Ton Van Genugten and Artur Ardavichus are placed in the Top 10 of the competition, but will aim to reach the best five trucks in the five stages left. The Dutchman is close to the objective, as he is placed sixth, less than ten minutes behind Airat Mardeev’s Kamaz. 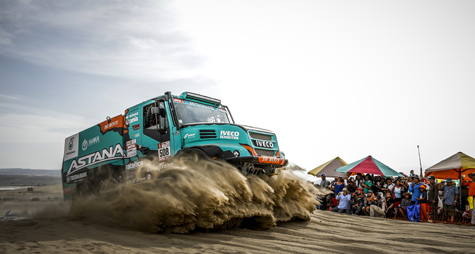 Emotions are more than words

​​​​​​​​Take a look at the most exciting pictures gallery to get into the authentic Dakar spirit and live the race from an exclusive point of view.

Re-live all the emotions

​Watch all the highlights of the greatest Dakar moments and enjoy the epic performance of the Team PETRONAS De Rooy IVECO, day by day.​